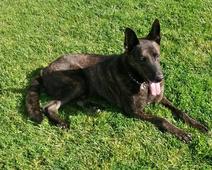 On Sep. 18, 2013 I adopted Max L386 a retired explosives detection/patrol dog and brought him to his new family and home. Our story is a bit unique in that we did not have a wait before adopting.

After a considerable amount of decision making, by My wife and I we submitted an application to adopt a Retired MWD. Included in our application was our history of caring for Medically needy animals and a willingness to adopt a dog knowing it was in need of extra care. The next day I received a call from Lackland AFB that there was just such an animal and that although he still needed behavioral testing he would be ours if we would have him. We were surprised and ecstatic.

After some communications and a clearance, we were finally told that I could come to Texas to pick up Max. I made arrangements to fly to Austin on Tuesday Sept 17, rent a car and drive to San Antonio where I would go to a local Pet Store and buy the necessary gear for taking max back home in California. I checked into a hotel close to Lackland AFB and attempted a night of sleep. On Wednesday Morning I went on base, picked up my pass and drove out to the 341st and met with the great folks who would process the paperwork and introduce me to Max. I also was asked to meet with Max’s Veterinarian so I could get some more details on his history and was handed his records. After the meeting with the vet, Max was brought out to meet me and we finished the paperwork.

One of the issues Max is dealing with is Lameness in his rear legs and it makes it effectively impossible to jump so he ended up finding a comfortable position in the foot wells of the back seat in the rental car for the drive back to Austin Airport. We got to the cargo area, and got him prepared to travel back to San Francisco Airport. I picked up my car, max and off to home where we got set up to surprise the kids with a new household pet. When The rest of the family got home. Max was very interested in searching the house and clearing it for entry so I let him walk the whole inside on leash before he felt comfortable. I’m not sure he knew what to make of the whole thing, but when the family got home he started to get the idea. The whole family has fallen in love with max. He’s big and acts a bit like a cranky old man, but melts once we have a chance to pet and scratch him. He loves going for walks with all of us, but neither of the kids even weighs as much as he does much less is strong enough to lead him so it’s always with one of the adults. Max does have a number of problems, some we knew about on adoption, and some we didn’t. We knew he had Hypothyroidism and some Arthritis.

One of his first stops was to the Vet we used when we had cats (one was Hypothyroidic also) for an assessment and it was clear there was more attention he needed so he went back on Friday, Sep. 20 for X-Rays and Bloodwork. We now know that Max has a metal plate in his right hind leg that was part of a TPLO (Tibial-plateau-leveling osteotomy) procedure to fix a Ruptured CCL (Cranial CruciateLigament) he received on duty. (This came along with other related injuries such as muscle tearing and a damaged meniscus.) Sadly, The Radiographs shows that max has the same injury in his left knee and probably needs a similar procedure on his left side that he’s already had on the right.

These injuries has lead to some pretty severe Arthritis in both knees which causes him considerable pain, although he refuses to show it most of the time. His blood work is being checked to see what kind of pain medication he can tolerate.

It’s only been a week, but he’s starting to feel at home now, and is enjoying some much deserved rest and relaxation 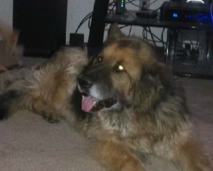 On 25 January 2008 MA2 Urias was assigned to MWD Deni. Together the team was responsible for the safe visitation of the Master Chief Petty Officer of the Navy (MCPON), Commander Navy Region Southwest (CNRSW), the Secretary of Defense (SECDEF), and the Vice President (VPOTUS). Also during their tenure the team was called out on multiple occasions for suspicious vehicles, gate runners, and to conduct authorized searches (search warrants). Their most notable find was over 1,000 rounds, clothing, and gun case used in a shooting and illegally transported on base.

MWD Deni was retired in December 2008 and was diagnosed with LumbosacralSpondylosis. MWD Deni has been receiving treatment for the past 6 years. Unfortunatley, MWD Deni will not be with us much longer, but at the age of 13, we can rest knowing that he has had an amazing, career and retirement.

MWD Ben served overseas before being reassigned to Lackland AFB where he helped many eager Airmen, Marines, Sailors, and Soldiers get through Dog Training School and go on to become handlers!

He currently has arthritis and is being treated for that as well as eating prescription food!

Ben was adopted by a retired TSgt., Frank, who was also the owner of MWD Bruno. 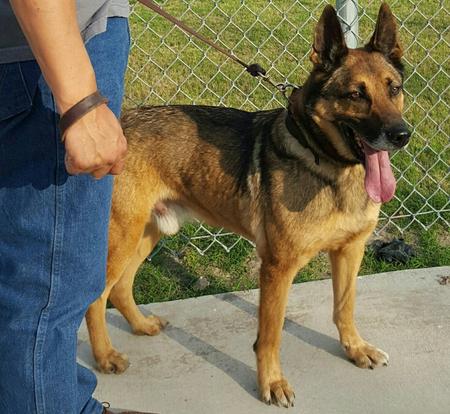 K9 Tyro was imported from the Czech Republic and became a Portsmouth, Virginia Police K9 in Jan. 2007 with his partner Officer Brian Ingram.

Tyro had a successful eight year career as a Narcotic / Patrol dog. He and his partner received many awards to include a Valor Award in 2009 from the Virginia Police Workdog Association. Tyro Retired in Dec. 2015 and still resides with Officer Ingram.

K9 Tyro developed aspiration pneumonia from inhaling food particles and underwent around the clock care to include Oxygen , IV treatments along with antibiotics. 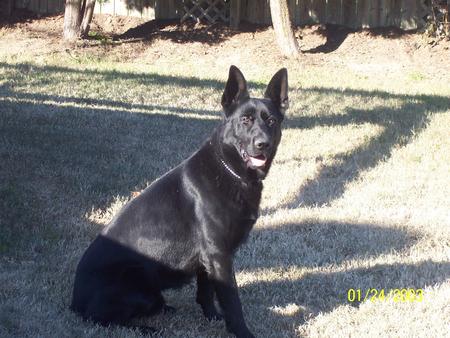 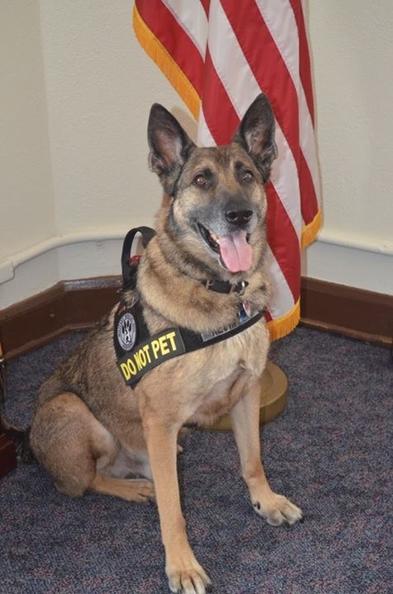 Kevin was a SSD purchased by DOD for the IED eradication program. After not passing his last qual he was sent back to Lackland to retrain.

He wasn’t responding as quickly as they had hoped and they decided the cost wasn’t worth the benefit of an 8yr old dog.

After eating grass much more than normal, the vet preformed an exploratory surgery on Kevin’s belly and found hardening of the bowel – consistent with IBS.

Kevin recently went through surgery to repair a bulged disk and investigate a cyst found on an adjacent disk. Luckily the cyst was not cancerous and he is already walking around much better!

CWD Diego served just over 2 years in Afghanistan and 8 months in Iraq before being  retired and adopted into his new loving family.

CWD Diego is a very loving dog who is adjusting to retired life amazingly well!

CWD Diego is currently on Rimadyl for his left hip that gives him a little trouble getting in and out of the truck. 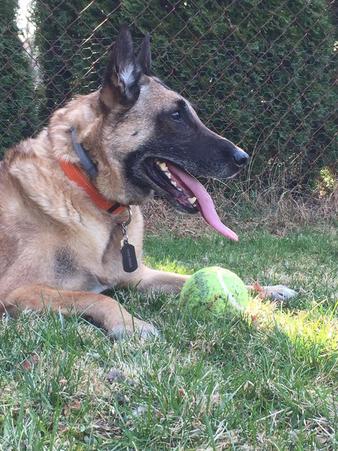 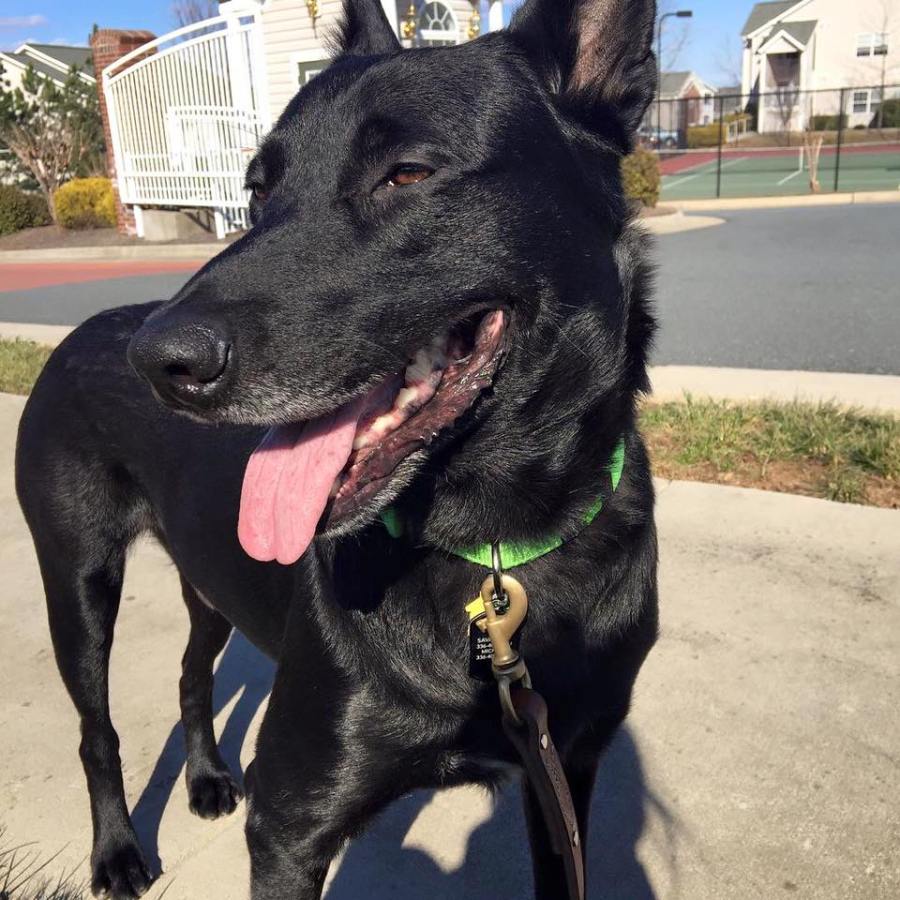 After being found as a stray Animal Control located the owner of Blast and found out his story.

Blast was a cell extraction K-9 in a jail down in Georgia. Since he was privately owned and not property of the DOC, when his handler became terminally ill he was forced to retire and eventually rehome Blast. He thought he had rehomed Blast to someone who he could trust but unfortunately, after being alerted by AC that Blast was in their care, they declined to pick him up.

Blast was adopted out to a family but brought back 2 days later with a cough and they stated they did not have the money to pay for his care. I drove down to Georgia the next day (the day before Thanksgiving) to pick him up.

He was in quarantine at the vet clinic after being diagnosed with pneumonia. He was skinny and weak and his skin was dry and flaky.

Blast is now healthy, happy, and neutered and living with his new family! 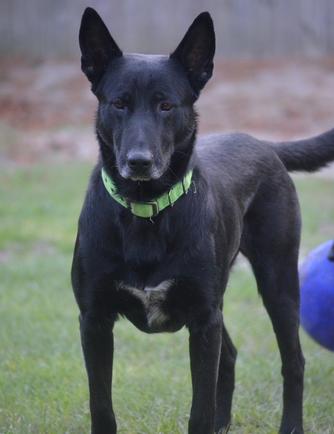 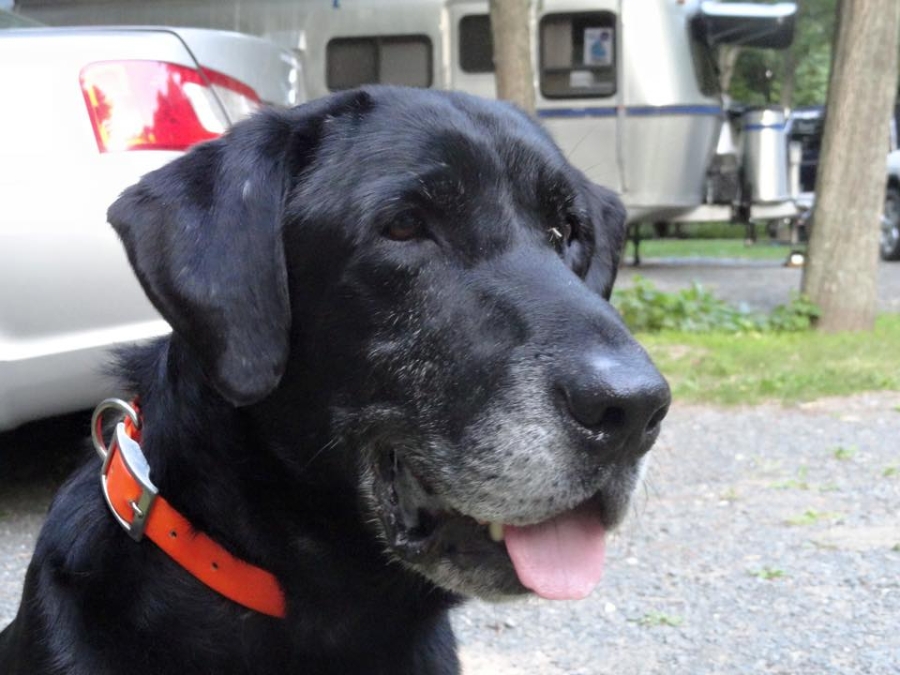 You may recognize MWD Chaney as the 2014 Military Working Dog of the Year in the American Humane Association’s Hero Dog Awards.

MWD Chaney has deployed to 3 times to Afghanistan and once to Iraq where he has saved countless lives after detecting roadside bombs, and other IED’s.

Chaney was adopted by his handler and are together 24/7!

He had some significant health concerns last year but is currently doing well!

MWD BBarry has quite the story. While browsing Craiglist one day, Linda came across a yellow Labrador that needed a new home. She fell in love and adopted him.

Little did she know this dog was MWD BBarry N041. She had named him Barney, which is what he goes by now.

Turns out that BBarry was adopted by someone who ended up not being the right fit, resulting in his rehoming.

After chacking his tattoo number in the database we learned that BBarry was trained in explosives detection and was used as a training aid for new handlers coming through the Dog Training School on Lackland AFB.

He now spends his days surrounded by love, playing fetch, and swimming in the lake!

CWD Laika was stationed in Afghanistan for 5 years. She was adopted by one of her former handlers and now lives with her and her family including another four-legged buddy, Cupcake!

Laika loves walks in the park, around the lakes, and going for rides in the truck!

She has a few medical concerns that are being addressed, as well as slight C-PTSD.